Southeast Asia – When one thinks about this area of the world, it conjurers up visions of the Vietnam War including the Ho Chi Minh trail, which ran through Cambodia and Laos…but Thailand, Cambodia and Laos have so much history beyond their involvement in wars. So many magnificent temples, so much beautiful scenery and many interesting people. During our trip there late February thru early March of 2013, we traveled by plane, bus, river boat, train, tuk tuks and even elephants.  It was quite a ride. 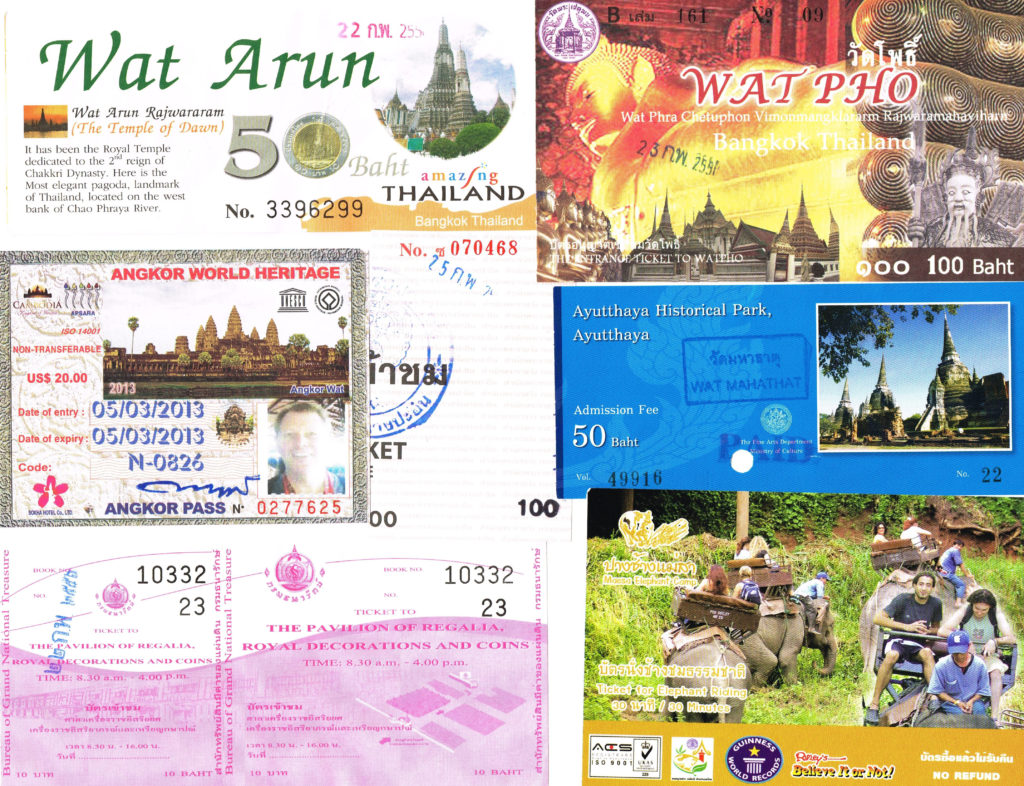 The Nerve Center of Thailand: Bangkok ‘s reputation as a wild city has been earned over the years …it is not for the meek and mild. The temples, such as the signature Wat Phra Kaew are absolutely awesome…a must see on anyone’s traveling shopping list. The streets are crowded with people and all modes of transport. Markets are abundant on land and water. There are mixes of old and new architecture throughout the city. And – it is not without its hucksters. Traffic is hectic – in the streets and on the Chao Phraya River which is intertwined through much of Bangkok.

And when we were there, tributes to King Bhumibol were everywhere. This most revered King, and great man, passed away in October 2016 with succession passing to his son, King Maha Vajiralongkorn. Thailand must find itself in a new era. Certainly the cities of Chiang Mai and Chiang Rai are a little more tame. And there are temples galore in the countryside beyond Bangkok, including those at Ayutthaya.

Cambodia‘s past still haunts it – millions of land mines still reside in thousands of acres of land – and take their toll. It may take a half century more to clear them all out – if they can locate them. However, enough progress has been made to allow tourist photographers like me to safely visit the great temples at Angkor Wat, constructed in the 12th century. And then there are the floating fishing villages and water people on Tonle Sap Lake and River. And wonderful food in Siam Reap – if you know where to find it. At last, it seems that Cambodia has some level of stability and peace.

The Capital of Siam

The Temples of Angkor Wat